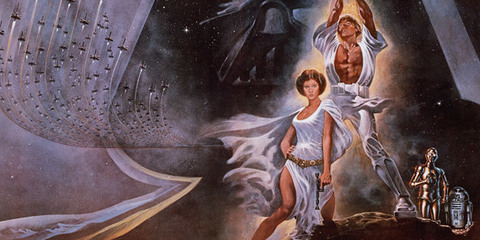 Since 1977 I have loved Star Wars and everything involving that galaxy far, far away. Like many young men of that time period, I was able to identify with Luke Skywalker in his desire to get away from the farm. Granted I didn’t live on a farm, although I did stay with my grandparents one summer and was tasked with feeding the chickens, stupid animals and I hated it almost as much as Luke probably hated tending moisture vaporaters. I could relate with his desire to do something to change the world he lived in, even though when the opportunity arose he was a little hesitant to go with ObiWan Kenobi.

Even though I could identify with Luke, I really wanted to be Han Solo; the scruffy looking nerf herder, who despite his crusty exterior really had a heart of gold. I remember thinking the first time I saw the Millennium Falcon how it was the coolest space ship I had ever seen, and I would have given anything to been able to go aboard her; something which is going to become a reality in a few years when Disney World opens Star Wars land…and yes, it is on my bucket list.

I was sixteen when I saw Empire Strikes Back, and at the time drove a 1962 Plymouth Valiant with push button transmission. That car would go 55 miles per hour if there was a strong tail wind and going downhill. I can’t count how many times I said, “It isn’t my fault!” to my friends as we drove around Muskogee in my own hunk of junk.

Spoiler alert: I remember how shocked I was when Darth Vader revealed who he really was to Luke after defeating him in a light saber battle. There was an audible gasp throughout the theater as we all felt the horror of Luke’s lineage with him. I’m pretty sure he wasn’t the only one to say, “That’s not true. That’s impossible!” I remember it took days and a couple of more trips to the movie theater to actually begin to accept the truth that Darth Vader was Luke’s father.

The thing about Star Wars I really like is the good vs. evil aspect in the story telling. George Lucas (the creator in case you didn’t know who he is) didn’t really write anything new or even especially creative; he took themes from the stories we already knew and just gave them some new window dressing. But man, what cool window dressing it is. Add to this a mystical energy field which surrounds everything and binds the universe together along with laser swords and blasters, how could you not like these movies?

One of the greatest things I have been able to do in my adult life was take my children to the theater to see these movies on the big screen. Much like when I was younger, my kids love this incredible universe given to us by Mr. Lucas. Leading a new generation into the ways of the force is really the only responsible thing any adult can do. After all what better way to teach right and wrong, good and evil and doing the right thing even if you’re a bit of a scoundrel?

As an original fan from the very beginning, let me encourage you to pick up a copy of the movies if you’ve never seen them and binge watch them over the weekend. You’ll be glad you did. And for those of you who are fans and have been, maybe it’s time to get them back out and watch them again. It’s just a thought.

May the force be with you.

I’m not really sure what the story is behind this picture, but I’m sure it doesn’t matter because look at that hair!
I’ve always loved Christmas!
My wife and kids got me a totally awesome gift for my birthday...a levitating Millennium Falcon...this is going to look SO cool in my office!
Things your Pastor won’t tell you blog is up...clink link in my bio...
Looks like 2019 got in one final kick...but look out 2020, I SEE you and I’m coming for ya!
Being a wild and crazy guy this New Year’s Eve...