Chivalry is a code of conduct which enables men to navigate through the society in which they live. I have always thought of it as the guidelines which give me the ability to know how I should act in any given situation. Chivalry is a choice to do the right things, at the right time, for the right reasons. But does the society we find ourselves living in now even want chivalrous men? The code I like the best I found in the movie Dragonheart. It says,

A knight is sworn to valor. His heart knows only virtue. His blade defends the helpless. His might upholds the weak. His word speaks only truth. And his wrath undoes the wicked.

For many decades now there has been an all out assault on men. Culture, the media, even hell itself has been working tirelessly in an effort to put men into this box labeling them as idiots, children or predators. And while this has been going on, most men seem to have been asleep, or possibly worse than asleep, they’ve believed the lies; accepting as fact that these were the only options available to them, going ahead and becoming the very things society has accused them of being. I’m not saying men are just victims and should be given some leniency for the stupid things they have done. I believe every man should be held accountable for his actions; this is one of the core values of chivalry.

On the other hand I do think we’ve got to get to a place where as a society we stop laying blame and staying so focused on the past. The culture we’re in right now seems to place more emphasis and energy trying to erase the past, rather than using it as a tool for learning what not to do again. As George Santayana is quoted as saying, “Those who cannot remember the past are condemned to repeat it.” It seems we can’t forge ahead into a newer and better future because society is too focused on past failures and working to change and rewrite history. And if we lose our history, then we are condemned to a cycle of repetition.

When I see statues or paintings of historic figures, they cause me to want to read and find out what the person did. Just this week I saw this picture 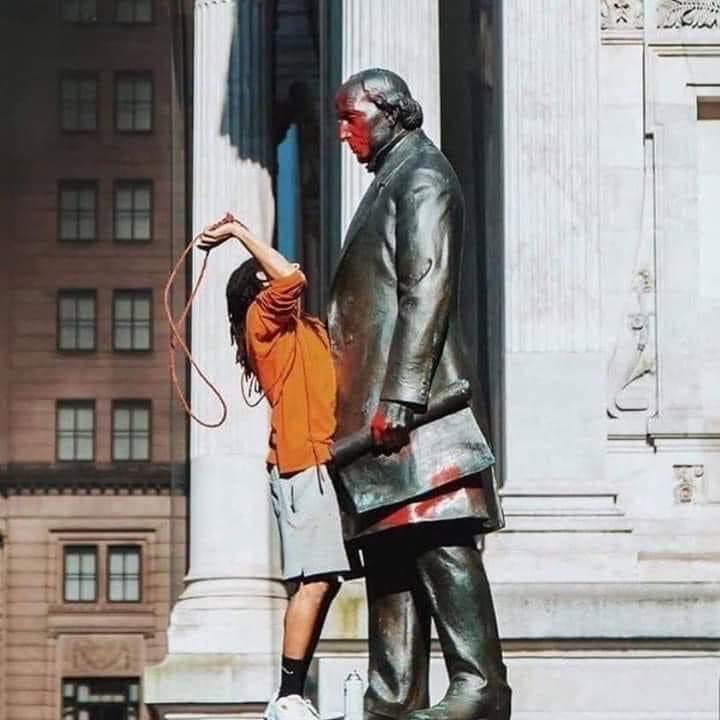 of a young lady defacing a statue of Matthias Baldwin. (The picture was taken back in 2020) Now I must admit I didn’t know who he was and figured from all the BLM rhetoric, he must have been a slave owner or something. So I did a quick Google search, and you know what I found out? Well here, let me show you:

Baldwin was a devout member of the Presbyterian Church and a consistent donor to religious and secular charitable causes throughout his life. In 1824 he was a founder of the Franklin Institute in Philadelphia. He was elected to the American Philosophical Society in 1833.

In 1835, he donated money to establish a school for African-American children in Philadelphia and continued to pay the teachers’ salaries out of his own pocket for years thereafter. Baldwin was an outspoken supporter for the abolition of slavery in the United States, a position that was used against him and his firm by competitors eager to sell locomotives to railroads based in the slaveholding South.

Baldwin was a member of the 1837 Pennsylvania Constitutional Convention and emerged as a defender of voting rights for the state’s black male citizens.

Why on earth then would this lady vandalize his statue? I mean it appears he was all about black lives mattering, long before BLM was a thing. Probably because she doesn’t have a clue, and our woke society believes in removing anything they deem negative in this world as a way of showing they no longer celebrate it. When this happens, they remove any hope of people actually finding out what these historical figures did; both good and bad.

When a society doesn’t trust its people to come to the correct conclusions for themselves, just wanting everyone to take the loudest voice’s word for it, isn’t this kind of squelching free thought; which by the way is protected in the United States Constitution. It’s interesting to me that for a group of people who say they are tired of hearing what we “boomers” have to say, telling us in effect to just shut up, they are ironically doing the very thing they’ve been accusing us of doing all along; telling everyone to believe their narrative just because they say it’s the right one.

It’s time for those of us who strive to be chivalrous men, to stand up to the intolerance and begin once more to adhere to the code of conduct laid down for us so many years ago. It’s time we start to treat women, all women with respect; opening doors for them, showing our children that their mother is the most important woman in our lives, getting off of our butts and going to a job to provide for our families, speaking the truth always, and defending the weak and helpless. Being men of our word, owning what we say and do for what is best for society not just ourselves. Only when we as men step up and live by this code of conduct will the world change and become a better place.

For the Kingdom and the King, shalom.