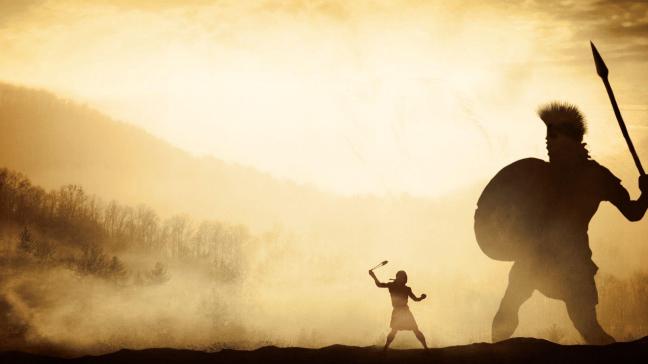 Today during the message at church, a thought occurred to me I have never had before. Thanks to my Pastor, Paul Daugherty for such a great message, but most importantly for bringing this little bit of insight to me, by way of the Holy Spirit. When I wasn’t a Christian, just a small boy in the Methodist church my parents attended, I knew the story of David and Goliath. I paid extra close attention I’m sure because we share the same name, and I often wondered if I could have done what he did when facing down the giant.

What I never thought about until today however, was what the people around David were really thinking prior to him actually confronting Goliath. I know what his brothers thought when he showed up to bring them food and find out for their father Jesse how the war was going. They were mad at him, saying he’d just come to see a battle, of course at this time there hadn’t been any battles. It had actually been forty days, and on every single one of those days, Goliath came out and taunted King Saul and his army saying, “Come out to fight us. If you defeat us, we will be your slaves, but if we defeat you, you become ours.”

David showed up one day just as Goliath was making his usual speech, and what he saw was the Israeli army running away from the battle lines, saying things like, “Have you seen him? He’s a giant!” But an interesting thing happened as well, they also reported to David how the king had promised to give his daughter in marriage to the man who defeated Goliath, and making his family free from having to pay any taxes. When David heard this, he went to another man asking what would be done for the man who killed the giant, and it was reported to him the same thing. David’s response was different from that of every other man, he said, “Who does this uncircumcised Philistine think he is, that he is allowed to defy the army of the living God?” It wasn’t too long before this was reported back to King Saul, and David found himself standing in the king’s tent.

What I hadn’t seen until today, was how the army of Israel had been watching Goliath spew his taunts in their direction for forty days straight, and not one of them had enough faith to face him, including King Saul. It was probably easier to believe the report of how they were all going to die because of this giant looming before them, with each passing day. Talk had to be about how big the giant was, and what a man of this caliber could do to each and everyone of them. By the fortieth day, Goliath was probably like Superman to them, invincible. The difference between the army and David however was in the reporting. David didn’t know who Goliath was, but the army did, because they had been focusing on the problem before them for forty days, instead of on the God who had saved their nation time and time again.

What struck me today was how the year 2020 with it’s Covid virus fear inspiring pandemic was an awful lot like Goliath standing before the army of Israel. I’m not denying the fact people contracted this virus and some of them even died, just as David never denied the fact Goliath was a giant, he just properly called him what he was; an uncircumcised Philistine. The use of the word “uncircumcised” is covenant talk. This meant Goliath did not have an agreement with God like each and every one of the Israeli men in the army did, so he was subject to the man who did have a covenant with God. David even went on to say he had killed a lion and a bear while watching his father’s sheep, and this Philistine would be no different; God would help him in this battle just like He had in those others.

One thing about David however, he did listen to the reports of the older wise men in the room, respecting his elders. He even tried wearing King Saul’s armor to face the giant. But ultimately told the king he had never worn armor and it would just get in his way, opting to stand against his enemy with the clothes on his back and a sling in his hand. It’s interesting he felt he had to face the giant with what he knew, and not with what man thinks is important. I think we should listen to the reports, just not make them our focus. But when we’re told we have to do something which goes against what we know and believe to be right and true, we have to stand up and say, “Thank you very much, but who is this uncircumcised virus? I’ll face it head on with God, that’s what I’m going to do,” and then go and do that.

One thing you should know however and be ready for, is when you stand in faith against a giant, the crowd around you will ridicule you. Standing in faith goes against what the crowd says and does, if it didn’t, then everyone would stand up in faith and defeat the giants in life. I’m sure you’ve experienced it at least once in your life, being ridiculed for saying or doing something the world around you will not do because of fear. People who are operating in fear instead of faith get mad at the ones who are using their faith, and will do just about anything to make you feel like you’re the one who is in the wrong.

I believe it is time for us to stop being like the army of Israel, walking in fear every time the media reports something about Covid or any other media filled frenzied event. Then, we need to go down to the stream, find some smooth stones to put in our shepherd’s pouch and be ready to sling stones back at the enemy who is trying to keep us Christians quiet. And it’s definitely time for those of us who are Christians to stop being timid (play awe inspiring music here) and to stop running away from the problems, but run towards them, facing head on whatever is set against us, with a tenacity that is written about in our instruction manual (the Bible). I think if more of us would stop listening to the crowd and focus on hearing God, we would see amazing things happen just like David did in the Bible.

Well, there’s that…for the Kingdom and the King, shalom!