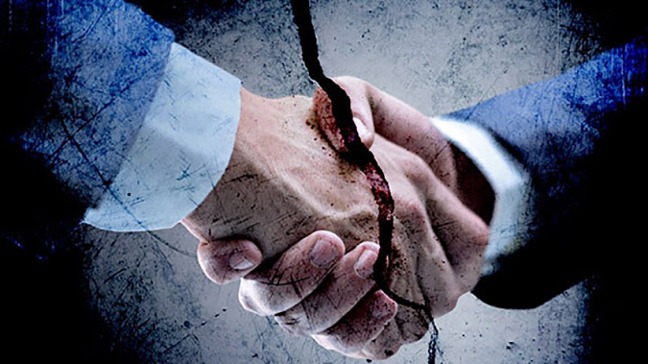 My oldest son and I were driving somewhere together one day when he was in his teenage years.  He was pestering me, just being a teenage boy when I said to him, “Micah you better stop it or I’m going to punch you in the face.”

He replied laughing, “Oh dad, come on, you know you’re not going to punch me in the face.” and he went back to pestering me.

About ten minutes passed when I reached over and lightly punched him in the jaw.  “Hey! You hit me! Why’d you do that for?”

“Because you said I’d never do that.”

Suffice it to say the pestering stopped. (At least for the remainder of the ride anyway.)

One of the worst things you can do as a man is to say one thing and then do another. While I don’t advocate punching your kids in the face, this one time I had to get a point across to my son, and be a man of my word.  Too often we tell people we’re going to do something and then it never happens.  Is it any wonder our world is such a mess?

What are we teaching our children when we do this?  We perpetuate this idea of saying one thing and doing another as the norm.  When my children were living under my roof, I really made an effort to do what I had told them I’d do.  If I said we were going to do something, I made every effort to make sure I could honor my word and do it.

My children did hear the phrase, “We’ll see.” in answer to most of their questions about doing something.  It got to the point where when I said that, they would roll their eyes and say, “That means we’re not going to do it then.

Think about it for a minute, if you tell your kids you’re going to do something then don’t, they learn it’s not important to do what they say from the most important person in their life.  In turn, they begin saying one thing and doing another; and the circle just keeps spinning and spinning; people never doing what they say.

Basically not keeping your word means you’re a liar.  Yes, you heard me correctly.  Every time you say you’re going to do something and don’t, you lied. Obviously being a liar isn’t as bad a thing in the eyes of the world like it used to be; after all we see it in politics all the time.  It’s almost as if lies have become the norm, and telling the truth is weird.

Be a man of your word regardless of how difficult it may be. If you tell someone you’re going to do something, then do it.  It’s up to us as men to make the changes in our own personal lives first and if enough of us do it, then we’ll begin to see change in our society and watch as things get back to the way they always should’ve been.

Now you know what I think, what do you think?