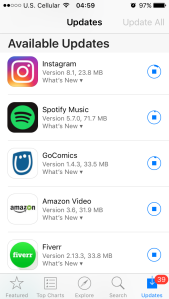 Opening my phone, I noticed the number 39 on my App Store icon, “Dang!” I thought, “It’s update time again already!”  Don’t you dread updating your phone?  It seems like almost every day there is another update for one of my apps, or my phone’s operating system needs to be upgraded.  It boggles my mind how much goes on with this little handheld device in order to keep it running.

And I try to be vigilant when it comes to my phone and managing the updates as often as possible so I don’t end up with multiple apps needing to be updated at once.  I don’t know about you, but I can’t stand seeing those little red numbers on my phone’s icons.  I have to be very careful or I’ll use up my data plan getting the updates, instead of waiting to get home where I have wifi.

Which makes me wonder, why does it bother me so much to see those glowing, little, red numbers?  Is it because in the back of my mind they represent a sense of failure on my part, glaring at me saying, “Hey loser, can’t you even keep up with something so simple?” Why do I let a piece of technology keep score on me?  Could it be possible Skynet is already among us just waiting for the right opportunity to rid the Earth of humanity?

I don’t seriously believe robots with artificial intelligence will come to power and set out on man’s destruction, but maybe we have become so dependant on technology we find ourselves being judged by it without even realizing it.  It could be we have an invisible tether from our phones attached to us, and it has a strangle hold on us.

It was raining pretty hard at  work one day, so I left my phone in the truck to keep it from getting soaked.  For the next several hours I worked unhindered by text messages or phone calls, and it was exhilarating.  There were a couple of moments when I was tempted to log in to my social media accounts to see the latest news and drama; but without my phone handy I just pushed those desires aside and continued working.  And do you know what?  I didn’t miss it at all.

Perhaps it would be a good idea to turn off my phone for a few hours each day and do something other than keeping my face pointed towards that little six inch screen.  It was Henry David Thoreau who said,

“I believe that there is a subtle magnetism in nature, which, if we unconsciously yield to it, will direct us aright.”

If we will lay aside technological devices and get out into nature for a little just a few minutes each day, I believe our lives would be so much fuller and satisfying.  Having said this though, thanks for reading my blog on your mobile device, now put it down and go do something without it.

Now you know what I think, what do you think?