I don’t really know what all the fuss is about.  There are  Star Wars fans and Trekkies, or Trekkers as I guess they prefer to be called.  I grew up watching Star Trek on television, and loved the science fiction based story telling; wagon train to the stars creator Gene Roddenberry called it. I was excited to travelthe stars with the crew of the USS Enterprise each week; seeing new worlds and crazy looking aliens.

In 1977, George Lucas came along with Star Wars, and it was as if I were in Gamorrean heaven.  (If you are a true Star Wars fan, you’ll get what I did there.)  His stories were set a long time ago, in a galaxy far, far away, about a kid from nowhere taking on an empire and toppling it.  At a time when movies were dark and gritty, it was a breath of fresh air for cinema lovers. 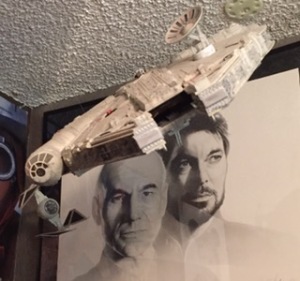 In the course of my life, I have had models hanging from my ceiling and artwork on my walls from both of these awesome franchises.  I have an Enterprise clock and pencil etching of Picard and Riker in my office right now, along with countless Star Wars toys too, I mean collectibles.  (I have Batman and Lord of the Rings stuff as well, so you see I’m a well rounded nerd.)

I don’t understand why we have to decide to like one of these more than the other?  Why can’t red shirts and storm troopers just all get along?  I mean after all; both of them are the expendable extras of their franchise, right?  Wouldn’t it be funny to see a support group started for the expendable extras, I’d love it, it would be hilarious?

Even though at this time in history being a nerd and liking this genre is popular, does anything scream I’m socially awkward and still live with my mother more than arguing about which sci-fi show is the best?

I think we should just enjoy each one for what it is.  Whether you prefer a logical Mr. Spock over the loveable scoundrel Han Solo; instead of complaining about which one is better, why not try and see these movies and television shows for what they are; great entertainment; telling stories about the human condition.

Well now you know what I think.  Live long and may the force prosper you.